The global installed capacity of agrivoltaics, or the co-development of the same area of land for both solar power and agriculture, has grown rapidly from about 5 MW in 2012 to approximately 2,900 MW in 2020. One of the largest driving factors for this growth is the need to continue to build solar projects to mitigate climate change in the face of dwindling available non-agricultural land. According to the National Renewable Energy Laboratory (NREL), by 2030, utility-scale solar could cover almost 2 million acres of land in the United States. A recent Oregon State University study also estimates that converting just 1% of American farmland to agrivoltaics would not only meet the nation’s renewable energy targets, but also save water and create a sustainable, long-term food system. Additionally, agrivoltaics have been shown to increase crop production, solar panel efficiency as well as farmer income.

These are just a few of the drivers behind NREL’s Innovative Site Preparation and Impact Reductions on the Environment (InSPIRE) program, which launched NREL’s in-depth dual-land-use research about 10 years ago. NREL now performs research at nearly 30 sites across the country, with some sites focused on native vegetation and others that are more focused on pollinator habitats, pasture grass to support grazing livestock or horticulture crops. Among these sites, Jack’s Solar Garden, a 1.2-MW solar farm in Boulder County, Colorado, is unique in that it represents the largest agrivoltaic research project in the United States and encompasses all four types of vegetation at a single site. In addition to providing ample agrivoltaic research opportunities to partner institutions like NREL, Colorado State University and the University of Arizona, Jack’s is also a community solar garden that serves as a local hub of education and community service with hopes to inspire a new generation of dual-land-use farmers through its nonprofit arm, the Colorado Agrivoltaic Learning Center. 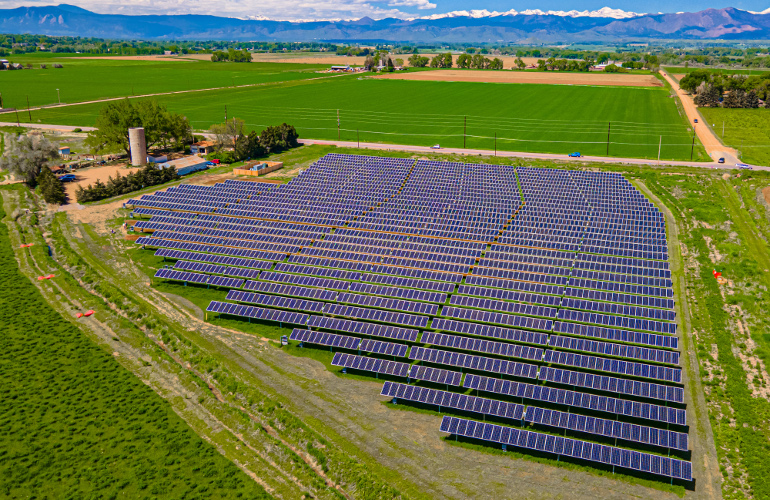 Family-owned and operated for nearly 50 years, Jack’s is located on a 24-acre farm that was purchased in 1972 by Byron Kominek’s grandfather, Jack Stingerie. Although the farm had been used for hay and alfalfa production, Kominek learned that these crops were no longer paying the bills. Kominek, a former USAID natural resources officer and Peace Corps volunteer with a Master of Science in environmental engineering, has always been passionate about the environment and concerned about making a positive impact. Kominek decided that instead of competing with neighbors by developing his land into a chicken or tree farm, he wanted to build an agrivoltaic farm that would both serve as a source of greater income for his family as well as benefit to his local community.

According to Kominek, he wanted the farm to be “a model for other small farms that want to keep their soils productive while taking advantage of the economic benefits that clean energy production can provide.” From working to update local building codes, to submitting to and winning a request for proposal from the local utility, Kominek actively sought out and built a highly productive community solar farm on the land. Jack’s now produces enough energy to power about 300 homes and has more than 50 residential subscribers, five commercial subscribers, as well as the City of Boulder and Boulder County as subscribers. Additionally, 40 types of plants, such as blackberries, herbs and tomatoes, will be sowed under the solar arrays, and 3,000 trees, shrubs and other pollinator-friendly plants have been planted around the solar arrays.

While Namasté Solar has extensive experience in agrivoltaics and co-located pollinator habitats, Kominek selected the Colorado-based, 16-year-old industry veteran firm because of its reputation. The 1.2-MW solar system is constructed with 3,276 solar panels paired with adaptable Solar FlexRack TDP Solar Trackers. Kominek originally became familiar with Namasté Solar’s top-tier work through its development, engineering, design and construction of the 1-MW Solinator Garden, which now provides solar power for the City of Fort Collins as well as hosts a pollinator garden. Solar FlexRack’s versatile TDP 1.0 Solar Trackers being installed by Namasté Solar in Jack’s Solar Garden at one of two unique heights to better understand the different microclimates created by the different heights of panels, and the subsequent impact on vegetation underneath.

While typical solar panels stand 2 to 3 ft above the ground, solar panels located on agrivoltaic sites often need to be installed at greater heights to allow for adequate sunlight to reach the vegetation underneath and allow farm equipment to navigate easily. Since Jack’s is also serving as an agrivoltaics research site, the solar panels and solar tracker system needed to be installed at varying heights to enable researchers to better understand the different microclimates created by the different heights of panels. Given its extensive prior experience on dual-use projects, Namasté Solar also knew it was critical to avoid overly compacting native soil, which could potentially limit the planting of certain species. The firm therefore proactively identified strict drive lanes for heavy equipment and made sure its staff and all subcontractors stayed within these lanes. Namasté Solar also avoided overly compacting native soil by forgoing the use of gravel altogether.

Since this project did not have a perimeter fence, and because farmers would be active underneath the solar panels on a regular basis, all electrical conductors needed to be properly covered. While conductors would normally be in free air, Namasté Solar decided to implement a robust mesh animal guard product underneath the conductors to protect both the solar system equipment as well as civilians, thereby de-risking the project and avoiding any long-term liabilities.

From increasing solar panel efficiency to conserving water to increasing crop yield, the findings from this project will provide critical insights to enable the proliferation of dual use renewable energy projects across the United States. Research from a project site in Arizona has already indicated that solar panels with crops growing underneath stayed cooler by about 16°F and produced 2% more electricity than those without crops growing underneath. Jack’s research partners hope to find similarly persuasive results. Jon Wedel, co-owner and senior director of commercial services for Namasté Solar, said that increasing solar panel efficiency is in fact part of what drew Namasté Solar to this agrivoltaic project in the first place. Further supportive research from Jack’s about increased energy yield in the context of agrivoltaic projects will likely persuade more installers and developers to take on dual-use projects.

Shade from solar panels can also create cooler, more humid microclimates for vegetation, and researchers want to better understand, through research at Jack’s, whether this can help sustain crops prone to withering in arid climates like Colorado’s. Research already indicates that there is the potential to increase crop production by up to 70% as well as reduce water use by 30% when co-locating solar arrays with crops, and researchers anticipate similar findings from Jack’s. Denver-based Sprout City Farms will be managing the crop production underneath the solar array at Jack’s and will be working closely with Jack’s research institution partners. A beehive operated by Best Bees and sponsored by Google located at Jack’s Solar Garden. Best Bees installs and maintains honeybee hives on commercial and residential properties across the U.S. and seeks to improve bee health and expand bee populations. Photo courtesy of Byron Kominek

Jack’s is also working to help struggling butterflies, bees and other pollinator species, which are responsible for pollinating nearly 75% of all crops consumed by humans, by adding flowers and grasses underneath solar panels. This is crucial, particularly as environmental stressors, such as land development and pesticides, have caused the number of bee colonies per hectare to decline by 90% since 1962 among U.S. crops that require bee pollination. Along with the partnerships with research institutions, Jack’s partnered with Audubon Rockies to plant the largest Habitat Hero in Colorado around the perimeter of the solar array – about 3,000 pollinator friendly perennials – in May 2020. Notably, pollinator-friendly plants have long root systems, which help conserve water by soaking up rainfall, which is important for semi-arid regions such as Colorado. Incorporating pollinator habitats under solar arrays also provides an opportunity to create large pollinator habitats at scale, which then can benefit surrounding agricultural communities through increased crop yield.

In addition to providing critical national research about dual-use projects, Jack’s Solar Garden has also brought clean energy and associated benefits to those previously unable to access it. Reports from NREL estimate that only 22 to 27% of residential rooftops can host solar panels. Jack’s also donates 2% of its energy production to low-income households in Boulder County and has an Artist on the Farm program to support local creatives. Additionally, the food grown at Jack’s will help benefit Longmont residents experiencing food insecurity, as this year’s food will be distributed through the Longmont farmers market and anyone with federal Supplemental Nutritional Assistance Program (SNAP) benefits will be able to purchase the food at half price.

Students and community members also have an opportunity to tour Jack’s to learn about agriculture, solar power and land-use management through Jack’s new non-profit arm, the Colorado Agrivoltaic Learning Center. Sprout City Farms will also offer incubator plots at Jack’s to help new farmers test their business plans and receive mentorship from experienced staff in the coming farm seasons. Jack’s is therefore cultivating the next generation of agrivoltaic farmers while simultaneously proving out the dual-use economic model, which allows farmers to maintain their land and enhance their agricultural activities while adding a new source of income from solar energy.

With Namasté Solar and Solar FlexRack’s help, Jack’s has been able to successfully emphasize the idea of community all while supporting crucial national research and education. Jack’s will also continue to prove the viability of agrivoltaics — both for farmers’ incomes and for future clean energy installers and developers, which will in turn enable greater national prosperity and the development of more renewable energy projects.

This case study was contributed to Solar Power World by HansenRE.