The Inflation Reduction Act established 10 years of solar tax incentives, but added new requirements to reach the full 30% ITC for projects 1 MWAC and larger. Starting on January 30, 2023, contractors with four or more workers on a jobsite must employ apprentices for a certain number of labor-hours and pay prevailing wages to all workers to receive the full tax incentive.

Project contractors are responsible for meeting these new requirements, adding a layer of risk for all large solar project partners that wasn’t there before.

Categorizing workers correctly for prevailing wage calculation could be a challenge for solar companies, where workers are performing many different roles on a jobsite. In its November 2022 guidance, the Dept. of the Treasury advised contractors to visit the Dept. of Labor’s website sam.gov to locate the Davis-Bacon Act’s mandated prevailing wage information across the country. Sam.gov is a database searchable by state and broken down by county and type of laborer.

“Part one is figuring out what the right wages are, and then it’s how do you maintain records?” said Eli Hinckley, partner at law firm Baker Botts. “I think that the key is having good justification for why you’ve categorized things the way you have.”

If there’s no applicable prevailing wage for a type of worker in a particular county, Treasury instructs contractors to contact the Dept. of Labor’s Wage and Hour Division by email at IRAprevailingwage@dol.gov. Contractors should note in the email the type of facility, location, proposed labor classifications, proposed prevailing wage rates, job descriptions and duties, and any rationale for the proposed classifications.

However, Hinckley expects an email process with the federal government could pose its own issues.

“Ever emailed the government for anything? Unless it’s automated, it’s very difficult to get an answer on a one-off basis,” he said.

SEIA’s VP of state and regulatory affairs, Sean Gallagher, believes that categorizing workers will be simple in most cases and won’t require a conversation with the government. But he still believes the industry could use some more clarification to ensure that subjective worker categorizations don’t cost project owners their tax credits.

“Most of the work of solar projects, it’s reasonably straightforward. It’s electrical work, it’s laborer work, or it’s operating engineers and pile-driving work,” Gallagher said. “You assign the workers to those classifications, and the prevailing wage is published, and you pay the prevailing wage, and you keep good records, and you’re all set.”

A job like un-crating solar panels and moving them around the site could be done by a carpenter, an electrician or a laborer, leaving contractors to decide which prevailing wage classification applies to the worker.

Any solar contractor that employs four or more workers must now hire a certain number of apprentices based on total project labor hours. In 2023, apprentices must perform 12.5% of the total labor hours of construction, alteration or repair work. In 2024, that number increases to 15%. Big companies are already creating in-house apprenticeship programs to meet these new metrics. Moss Construction started a program in Florida, with plans to expand into all states in which it works. The company says apprentices who complete the program will receive a “Nationally Recognized Certificate in the Occupation of Solar Installer.”

“The Moss Apprenticeship Program was developed in response to the labor needs facing our growing industry as well as to address the recently passed IRA legislation requiring apprentice-to-journey-worker ratios,” said Andrew McAllister, president and chief scaling officer at Moss, in a press statement. “It also reinforces Moss’ focus on safety and quality by having an exceptional workforce.”

“I think that if I establish the apprenticeship program, and I’m awaiting certification from Dept. of Labor, but I’m treating them as though they’re qualified apprentices and I’m doing a somewhat reasonable job compared to what the DOL rules are, that probably gets you safe,” Hinckley said. “We’ll be engaged in that process to get some clarity on the Good Faith Exception. I think right now, what employers are instructed to do is to follow local customs,” he said.

Those “customs” would include how far outside a region a company is expected to go to seek apprentices. Companies can look to other industries that require apprentices for local advice.

Prevailing wage and apprenticeship requirements aren’t new for installers that have experience building solar projects for the government.

“If you build a federal project, you’ve done it. In the wind space, because most of the wind-based EPCs tend to be bigger and more established companies, nobody’s really panicked about it. On the solar side, where we’ve got lots of smaller EPCs who have never done this, there is a lot more anxiety,” Hinckley said.

“In the past, when we’ve done a commercial project, we had to find a customer who was willing to pay our prices, because of the standards that we already had instilled for [what the] military and the federal government require on their projects,” Bagley said. “I’m hoping that [the IRA] makes it more of a level playing field going forward.”

HSGS and other government contractors are also required to adhere to the Buy American Act and source solar products from the United States when possible. The contractor’s existing vendor relationships could also help when project owners are looking to secure the 10% domestic content adder.

HSGS also has experience paying prevailing wages. Bagley estimates 85% of the company’s business requires Davis-Bacon compliance. For those projects, the CFO produces wage reports for the contract holder on a regular basis, detailing the hours worked and rates paid. 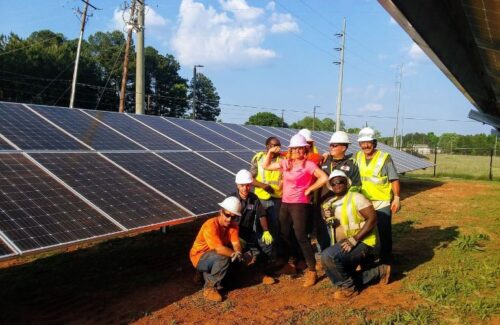 Then, HSGS must ensure any subcontractors the company hires adhere to the same protocol.

For apprentices, Bagley said HSGS is already surpassing the minimum requirements in the jurisdictions where it operates. It hasn’t always been easy to find workers, though.

“We’ve had to grow in-house a lot. We’ve been fortunate, too, because of the rates that we pay, we’ve been able to get the workers that we needed that were already qualified,” he said.

Most of HSGS’s apprentices fall in the electrician category, so new programs like Florida’s could help source apprentices in other job roles.

“Anything like that would certainly help,” Bagley said. “Then, we can train them up to move to the next level if they’re interested.”

New apprenticeship and prevailing wage requirements are placed squarely on the contractors building the projects. Project owners and tax equity investors, who finance the project and expect to receive the full 30% tax incentive, will be relying on EPCs to check those boxes and keep accurate records.

“Part of the contract I have with you is going to require that you provide me adequate records, and then if you fail to meet prevailing wage or apprenticeship in some way, you are on the hook to make that whole with the employee and any penalties you owe to the Dept. of Labor,” Hinckley said. “All that’s going to be built in now to this contractual process between owner and contractor.”

Hinckley expects solar project insurance companies to take on some of the risk, too, especially on larger projects.

“For larger projects, where there are some questions, there are third-party insurers that will step in and say, ‘We’ll evaluate what was done and take that risk for you for a premium and so if there is a problem in the tax credits, we’ll take that responsibility,'” he said.

“It’s an administrative challenge. It’ll cause some friction, but not so much then it’ll slow things down in terms of deal velocity,” Hinckley said.