Uncertainty seems to be a defining quality of working in the solar industry. In recent memory, we were unsure of how to carry on addressing a warming planet when the world shut down due to COVID. We awaited an ambitious overhaul to American renewables in President Joe Biden’s proposed Build Back Better Act that took the industry’s collective conscious by storm and just as quickly faded into obscurity. We watched tax credits that were integral to sustaining domestic solar growth taper off with no extensions or renewals in sight. The global supply chain is still recovering from the delays caused by the pandemic.

But let’s cover some concrete certainties.

The Solar Power World team attended the first RE+ conference since the start of the pandemic, an event that drew more than 27,000 people to Anaheim, making it not only the largest solar show in the United States but also the largest energy-related trade show in the country. The Interstate Renewable Energy Council reported that the U.S. solar industry employed approximately 255,000 people last year. So, by those numbers, more than 10% of the industry attended a single event. And every manufacturer and installer I spoke to at RE+ said they were busy and seeing a lot of interest from attendees.

We covered the momentous passage of the Inflation Reduction Act in our last issue, and now we focus on the implementation of the landmark bill in this final 2022 edition of SPW. There are still many questions about the IRA, but the Dept. of the Treasury will hopefully soon make final declarations on the provisions related to solar workforce, project development and manufacturing.

Even before the finer details come out, manufacturers are already expanding operations in the United States. I was able to visit Nextracker’s newest torque tube production plant in Pennsylvania in September, where the single-axis tracker manufacturer is adding a second production line with the IRA in place. We’ll continue to report on new factories starting up in the wake of manufacturing tax credits in the IRA.

Uncertainty still remains around the details of federal support for U.S. solar. Yet, that is the nature of proceeding into a new generation for an industry. We certainly don’t have all the answers at the moment, but Kelly, Kelsey and I have covered a range of topics related to the IRA in this issue of SPW. We hope you’ll continue to recognize us as your go-to sources regarding the U.S. solar market. 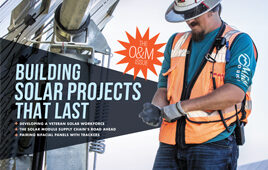