Currently, the federal government does not buy solar equipment directly, instead only purchasing energy via PPAs from American companies. Those companies are not required to use American-made solar panels or other equipment to generate that energy. The EAGLE SOLAR Act would close that loophole and require the American developers and solar system owners to use American equipment in order to fulfill federal PPAs.

Original cosponsors of the Act include Marcy Kaptur (D-OH) and Peter DeFazio (D-OR).

“American workers and American companies must be the ones who power America. The EAGLE SOLAR Act will cement Ohio’s role as a hub of solar innovation and support living wage jobs for hardworking men and women throughout the industry,” said Congresswoman Kaptur. 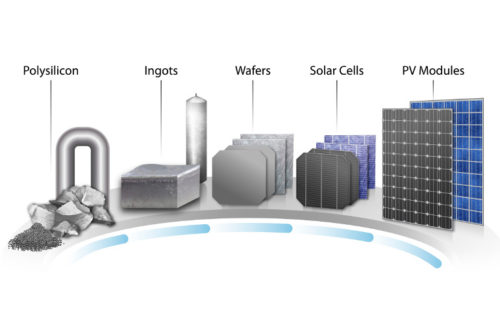 NREL illustration showing the stages of creating  crystalline silicon solar panels. The only thing able to be accomplished within the borders of the United States right now is assembling foreign solar cells into final solar panels.

It should be noted that Congressman Ryan represents Ohio, home to the world’s largest thin-film solar panel manufacturer First Solar, a company that is largely supportive of additional tariffs on solar panels coming from Southeast Asia. First Solar uses cadmium telluride in its solar panels, not crystalline silicon, which is the solar panel makeup that is under investigation right now by the Dept. of Commerce and what makes up the large majority of global solar panel sales. First Solar panels are already inherently “American made” and eligible for the Buy American Act requirements under this new proposal. If U.S. crystalline silicon solar panel assemblers have to import solar cells from outside the country (which is already impossible to avoid), their solar panels would not be eligible to be used in projects under federal PPAs.