Plane crashes rarely happen, but the fear of an accident is real for many people. Still, thousands of Americans fly every day. The NBC television drama “This is Us” showed that Crock-Pots can cause house fires, but we’re still cooking chilis and roasts while we’re away at work.

The threat of energy storage systems causing or contributing to building fires is also real yet incredibly rare, but as adoption grows, life and property wellbeing will become larger concerns.

Right now, solar + storage fire worries usually arise around lithium-ion technologies, with a divided war between nickel manganese cobalt (NMC) providers (Tesla Powerwall, LG Chem) and those developing lithium-iron phosphate (LFP) batteries (sonnen, SimpliPhi). On paper, NMC batteries have an increased risk of thermal runaway, the phenomenon that causes battery fires, simply because of the addition of cobalt. But put even an LFP battery in a less-than-ideal situation, and the end result of an accidental fire is the same — potential damage to the system, nearby surroundings and human life. 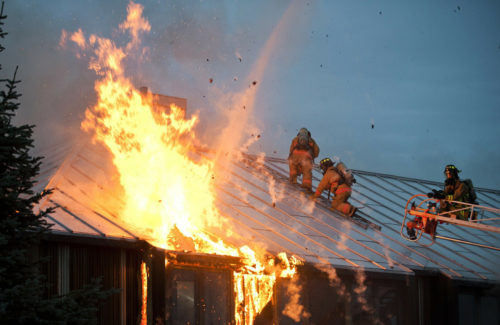 “Just because the likelihood is different doesn’t mean the impact is different,” said Victoria Carey, senior consultant of energy storage for quality assurance company DNV GL. “When doing installation design, you have to design for minimizing the likelihood [of a fire]. It’s always good to look at the chemistry capabilities and balance how to mitigate the impact with whether that battery’s energy density is exactly what’s needed for a particular application.”

Batteries that like cool, constant temperatures probably shouldn’t be installed outdoors in the desert. Off-grid winter cabins might benefit from using lead-acid batteries over the latest lithium product. Just because a solar installer is a certified dealer of a specific battery chemistry doesn’t mean it’s the best product for every job. Carey said she is comforted that the solar industry is taking battery installation more seriously now than even two years ago.

“Folks have been treating batteries as a black box add-on to their equipment they’re installing. There’s now a realization that although there are no literal moving parts, there’s a lot of different small components that need to be managed and are delicate,” she said. “There’s a sort of awakening in the last year. We’ve called energy storage the ‘Wild West,’ and it is certainly still in early development stages, but there’s a sheriff in town now.”

Although battery fires aren’t likely to happen, it’s still important to design and plan for the worst.

If a battery is going to catch fire,  the likely cause is thermal runaway. This is when a battery experiences an increase in temperature that eventually leads to cell short-circuiting or disintegration that can spark a fire.

There are three main abuse factors that can send a battery into thermal runaway — mechanical, thermal or electrical. Mechanical would be physically damaging the unit, which can generate gases or increase the heat of a battery cell. Thermal is heat-related — air conditioning or airflow not reaching the cells, allowing heat to build up. Electrical abuse happens during overcharging, undercharging or shorts from the inverter. Often, damage can be reversed if caught quickly. “There is an opportunity once that abuse factor has been put onto the cells, if it’s removed then the thermal runaway condition may not occur, but there is a point of no return,” Carey said. “If it’s not stopped, it will continue through these second-order effects, which at its core is a release of potentially flammable gases. If there’s an ignition source, that can then become a fire. If there’s not an ignition source, these seminal gases can gather in large enough volumes that could result in explosive conditions.”

DNV GL is trying to understand the risks with battery fires before they happen. It released its first Battery Performance Scorecard in 2018, which ranks and evaluates different types of batteries based on performance and safety testing. By putting the batteries through the wringer, DNV GL finds the performance limits of the systems or can produce thermal runaway, depending on the test.

“The whole goal of destructive testing is to determine if something goes into thermal runaway, what happens?” Carey said. “Yes, there may be some batteries that are more resistant to thermal runaway, but we have found across the board that they release the same chemicals with the same level of toxicity and potential flammability.”

A safe battery is determined by its initial manufacturing. DNV GL hopes its battery scorecard brings more transparency to the market.

“There’s a resistance for companies to share even their name that they’ve participated in this type of testing. There’s concern about how it will be perceived by customers,” Carey said. “Creating greater transparency in the market is one of the things that we see is really important to improving quality of the systems.”

How should batteries be installed to prevent fires? This LFP battery with inverter charge controllers, power electronics and system management was installed in a NEMA 3R outdoor-rated box, away from livable spaces, just in the off-chance of an accident.

If battery installers follow the manufacturer’s manual and adhere to the locality’s fire codes and standards, the chance of a fire starting is near zero. LFP battery manufacturer Blue Planet Energy claims to make the safest lithium battery on the market for energy storage applications because of additional built-in safety links, but still, head of sales Gregg Murphy said the surest way to prevent battery fires is to install the system correctly.

“Any technology, if installed incorrectly, is a potential electrical hazard,” he said. “The biggest support in the market place is for installers to closely follow the installation manual on top of selecting safer battery chemistries. The top questions we receive in customer service are around installation best practices.”

“We suggest to space batteries out in the building. If there are fire breaks between each, then the fire cannot escape one rack. If you can contain the fire to a smaller spot, it’s going to burn for a shorter duration, and you can limit the damage,” he said. “Another suggestion is installing a sprinkler system. Lithium-ion batteries do not react to water, so you can put a lot of water on them to cool them. It won’t extinguish the fire, but it will stop the fire from spreading and jumping to other exposures.”

O’Connor said many of NFPA’s large-scale battery installation requirements can be translated over to the residential market with an extra dose of practicality.

“We use more common sense and basic rules for residential batteries because it’s difficult to enforce all these details. No one is going door to door to see,” he said. “If you’re going to install a storage system in the garage, make sure you have space for vehicle protection — if you’re backing into the garage, you don’t want to hit the battery. Make sure batteries are not in the place you sleep, because it would limit the time you egress your house. Don’t install a battery outside under a window, because during a fire, windows are used to exit the house.” There may be adequate airflow to this energy storage system, but a safer alternate installation site is outside or in an unoccupied utility space.

While the likelihood of a fire in a residential application is lower, installers should still plan for accidents. Installing batteries in rooms with fire-rated walls without a lot of clutter that could impede airflow is a basic first step. Keeping batteries away from livable spaces (bedrooms, living rooms) allow for better survival rates in case a fire does happen. So, all those battery company promotion pictures showing systems in the living room as aesthetic focal points — no way. Keep the battery in a garage or unoccupied utility space, just to be on the safe side.

What are some best operating practices to prevent battery fires?

A little common sense follows to the operational side of an energy storage system. A high-functioning battery management system (BMS), which typically comes standard with lithium-ion battery systems, will help to balance charging and discharging rates, monitor battery voltage and measure temperature to ensure the system doesn’t run into problems. But just because a BMS is monitoring the battery’s health doesn’t mean the operator should push it to its limits.

O’Connor’s best advice is to prepare and plan for the worst — know what to do in case of a fire and coordinate with first responders. NFPA 855 requires safety labels explaining what type of battery is installed and if there is a suppression system in place. These precautions are very important to first responders so they aren’t surprised when they arrive at an emergency.

“A big concern is stranded energy. You can’t discharge these batteries quickly when they’re on fire,” O’Connor said. “Even when a first responder is doing cleanup, there is a shock potential. If they put [an axe] into a battery that is energized, there is potential for injury. So labeling is important.”

Above all, just be smart about installing, operating and owning an energy storage system. When we fly on airplanes, we have access to safety information and receive demonstrations on what to do in an emergency. An accident isn’t likely to happen, but it’s good to have that information on-hand, just in case.

“Operationally, as long as these systems follow good quality practices, you have a very low likelihood of failure,” Carey said. “But if you don’t admit there could be a failure, you’re not going to prepare the people who are trying to save lives and property appropriately. It’s a touchy subject to say your product can fail, but I think it’s incumbent upon people to act responsibly and admit that something could happen.”