Solar modules no longer need to simply wind up in the landfill once they’re decommissioned. Is a panel cracked? Shattered? At the end of its warranty lifetime? That panel can still serve a purpose, whether run through a recycling process and fed back into the supply chain; or repurposed or reused as a replacement panel or a power source for a smaller project. 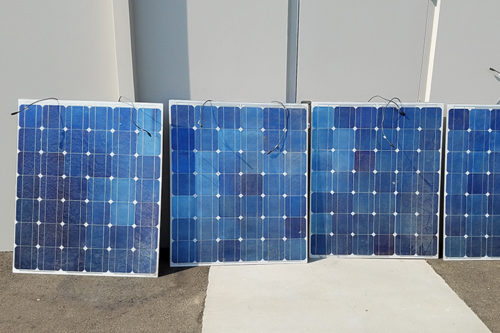 Modules lean against the wall at the working for the Son solar facility. The panels the solar company receives are repurposed for smaller solar projects or recycled.

Companies are putting in the hours to ensure the longevity of solar, despite a lack of any legislative backing. One does it through an online marketplace for solar; another is repurposing decommissioned panels to power homes in need; and another recently opened a solar recycling facility.

EnergyBin is a members-only, business-to-business web platform for solar companies to list or seek solar components for sale or resale. The renewables marketplace grew out of BrokerBin of the Broker Exchange Network, a similar service that lists commercial computer equipment rather than solar.

While its sole purpose isn’t resale, EnergyBin has found success in connecting sellers with buyers interested in purchasing replacement components for solar arrays. Installers seeking older replacement panels to match the panels in existing solar arrays might be hard-pressed to find them with distributors. However, those years-old components might be listed on EnergyBin.

There is an application process and fee to join the EnergyBin community. Members can search the marketplace by product and receive quotes from multiple distributors at once to compare prices. Solar panels installed on a slanted rooftop home in Mexico by working for the Son solar provides free electricity for the occupants.

“Sometimes there are customers that we’re working with that aren’t necessarily interested in purchasing the latest and greatest technology, and they’re perfectly fine with settling for a more feasible option, which might be new or refurbished,” said Melissa Schmid, marketing communication manager at EnergyBin.

When a panel reaches its warranty lifespan, that doesn’t necessarily mean it can’t produce energy. Vincent Latham Sr., founder of working for the Son solar (WFTSS) of Fresno, California, knew that despite degrading efficiency, used panels could be installed on volunteer projects where any amount of energy helps.

Since its start, WFTSS has kept more than 100 tons of solar materials from landfills, Latham said. Its repurposed panels have been sold to buyers like solar DIYers and companies seeking replacement parts for existing arrays. By selling repurposed panels and decommissioning large-scale arrays, WFTSS can fund its main mission of bringing pro bono solar projects to indigenous people of Mexico. With additional assistance from donations, Latham works with Youth With a Mission ministries (YWAM), an organization that builds homes in about 20 countries for people in need, including Mexico. Latham said the communities they work with often have small power grids, or sometimes none at all. Since solar arrays can’t tie into this fragile or nonexistent grid, WFTSS makes solar+storage microgrids for those homes using repurposed panels.

Part of Latham’s mission is teaching people about solar independence, as well as the viable lifespan of solar panels.

“I’ve probably spent most of my time educating people on what we’re doing,” Latham said. “Nobody even understands that there’s this burgeoning need [for recycling] that’s going to happen, because these panels are coming to an economic end of life, not a liability end of life.”

Latham previously worked for SolarCity, and during his time there saw many panels end up in a landfill.

“We started decommissioning huge solar arrays that needed to be removed from roofs or what-have-you, because they were going to reroute a commercial building or a county building and they didn’t know what to do with these panels,” he said. Usable components like wiring were removed, and the aluminum frame was ground up for scrap. The remaining pieces were sent to landfills. A stack of solar panels set for recycling will soon be separated from their aluminum frames, wiring and junction boxes and run through an oven to begin the process at RecyclePV’s solar recycling facility.

Latham learned it didn’t have to be that way. Even when the glass is cracked, WFTSS can seal the panel for further use. In addition to repurposing, the company recycles panels. Currently, through heating the panel and removing components, the company can recycle about 90% of a solar module.

That process removes silicon from panels, which is then returned to the manufacturing stream to make new modules. WFTSS is working with California State University, Fresno, faculty to determine a means to safely remove phosphorus, platinum, silver and lead from panels. Prior to having in-house recycling, WFTSS had to send loads of decommissioned PV equipment overseas. Now, other solar contractors can send retired solar arrays to Fresno.

“Safety is our main concern, and we want to try to be environmentally friendly at the same time,” Latham said. “We really believe that this is something that really needs to get done, and not just grind it up and throw it into a landfill.”

The State of California passed Senate Bill 489 in 2015, which designated photovoltaic solar panels as hazardous materials; meaning the technology cannot be disposed of in landfills in the state. This poses a problem for decommissioning arrays, since California’s the largest solar market in the United States. There is no mandated recycling program at the state or federal level, either. While California’s landfills are free from future solar panels, decommissioned arrays are still ending up in landfills in different states. If panels can’t be shipped to nearby states, they sit in stacks in California warehouses.

To avoid bogging down other states’ landfills with panels, RecyclePV of Grass Valley, California, opened a solar recycling facility in Arizona in the summer of 2018.

“We’re seeing the problem being pushed off to other states where regulations are more relaxed,” said Sam Vanderhoof, owner and consultant at Solar Cowboyz, the umbrella company for RecyclePV. “The secondary issue that we see is the cost to recycle. The net value of the materials that could be the claim on solar panels is less than what the customer should process.” After the glass panel from a solar module is heated in an oven, it is crushed, and the materials are separated and ground up.

The process varies by type, but to recycle a panel, RecyclePV separates the aluminum frame, removes the junction box and attached wires and runs the glass panel through an oven. That’s followed by crushing and separating materials. “It all depends on the type of module, but that’s the basic process: it’s a separation and heating process,” Vanderhoof said. RecyclePV can recover 98% of materials from a decommissioned module.

“I started watching what was happening to these solar panels after they were used, and in most cases, they can be reused,” Vanderhoof said. “That’s something we totally advocated [for], reusing these solar panels. You can take panels that have been out in the sun for 20 or 30 years, and a lot of the older ones still work.”

The second service RecyclePV offers is repurposing and reusing solar panels. The company accepts shipments of decommissioned arrays for repurposing or recycling from anywhere in the country. To be tested, the panels are shipped to a site where they are assessed. The panels are repaired and then redeployed if they’re not functioning. Since these modules are refurbished, they’re sold at a lower cost ($0.05-$0.15 per watt, compared to $0.50 for new panels on the wholesale market). RecyclePV is currently finding refurbishing centers closer to its operations to cut shipping costs. The crushed materials are processed further into a powder, which will be sent back into the manufacturing chain, possibly used again in solar products. RecyclePV can recycle approximately 98% of the materials in a solar panel.

Vanderhoof said the biggest issue the solar industry is facing in terms of recycling is a lack of nationwide policy for recycling modules. There are many reasons panels might be considered trash by some due to manufacturing errors, brown spotting, delamination and diode defects; and severe weather damaging whole arrays, but may still be usable, either by repurposing or recycling. An influx of end-of-life solar equipment is expected in 30 years, but thousands of potentially usable panels are sitting dormant in warehouses or heading to landfills today. There are companies out there to help.