When forecasting how much energy your solar PV system will generate for a customer, accuracy is paramount. If your modeling software overlooks something important, like the stringing configuration of your system or shading from a nearby tree or other obstruction, it could result in errors and an unhappy customer.

Advances in solar software have given solar contractors the tools to confidently design PV systems and accurately model their economics and energy production without physically taking measurements at the project site.

Horizon shading, the latest addition to Aurora Solar’s suite of modeling tools, adds an additional degree of accuracy for solar production estimates. It is also the first time that this functionality has been automated by a solar software (no need to import terrain data!), ensuring time savings for solar companies who want accuracy they can stand behind.

What’s changing?
Aurora’s irradiance maps and performance simulations have been a huge part of its success as a tool for remote site analysis. However, their benefit hinges on the ability to accurately model the physical characteristics of the site. For select sites where hills or mountains could cause shading, the need to model the terrain around a project could present a challenge.

Prior to the release of this feature, Aurora assumed that a flat landscape surrounded a project site. Objects and obstructions such as trees and surrounding buildings were manually added by designers, which worked well when modeling “near-shading” at the site, but the modeling of “far-shading” from surrounding hills and distant mountains was more difficult. A workaround employed by some users was to create polygon obstructions to model terrain. However, this proved time-consuming and error-prone. To make modeling this type of far-shading much easier for users, we decided to develop a feature called horizon shading.

An example of terrain that would have been labor-intensive to model for shading purposes, prior to the release of Aurora’s new horizon shading feature.

What is horizon shading?
Horizon shading enables the automatic modeling of shade due to the terrain surrounding a site, to support more accurate assessment of shading and improved solar production estimates.

When an irradiance map is generated or a performance simulation is run, Aurora collects over 1 million elevation measurements from the nearby area and uses them to create a profile of the surrounding terrain. The resulting 360-degree elevation map is known as a horizon profile.

A diagram showing the sun path (yellow) throughout the year and the horizon profile (green) of the terrain for a building with a large hill to the southwest. The sun follows the top of the sun path from east to west in the summer and the bottom in the winter.

When calculating irradiance, Aurora checks to see if the sun is below the horizon profile. If that’s the case, the beam component of irradiance is blocked. Additionally, at all hours, the amount of diffuse light is reduced because some of it is blocked by the horizon.

Where does horizon shading matter most?
In many cases, the horizon blocks less than 1% of available light, but the effect can be much more drastic in hilly regions. Houses in valleys, canyons or even those situated on the side of a hill can all experience varying degrees of shading from the land.

The effect of horizon shading on utility bill savings can also be amplified by time of use (TOU) rates. In the example profile above, a large hill sits to the west of the site, which would reduce production during peak-pricing hours in the afternoon according to California’s current TOU schedules.

The distance between a site and prominent terrain also influences the impact of horizon shading. The example below illustrates horizon profiles for four sites situated at various distances from Japan’s Mount Fuji. The mountain obscures more of the sky at the site that is only 10 km from the peak, compared to the site that’s 16 km away.

(For an example of an extreme case of horizon shading, check out Aurora Solar’s solar site assessment for this Bavarian Castle!)

Horizon profiles for four sites situated north of Mt. Fuji at different distances. Note that the sites that are further away also have other, closer hills to the north.

The automatic calculation of horizon shading represents a major step forward in the accuracy of remote shade assessment and solar production modeling with solar software. The automation of this functionality — a first in solar design software — is another way that Aurora is working to help solar contractors save time and money by getting the most accurate assessments with fewer site visits. 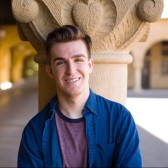 Brett Harvey is a computational scientist at Aurora Solar, researching and developing improvements to Aurora’s simulation tools. He received his M.S. from the Institute for Computational & Mathematical Engineering at Stanford University.