Floating solar projects are scaling up in the United States, and while the technology is still emerging here, it isn’t necessarily entering uncharted waters. The buoyant solar structures have been deployed in single international projects reaching almost 100 MW, using blow-molded plastic floats as racking, mooring adapted from existing marine industries and anchors like those found on ground-mounted solar projects.

U.S. installation requirements will differ from international rules, but the structural components holding the panels in place are the same, and they are tested to withstand the elements of these marine environments. In fact, water bodies provide benefits to sited solar arrays, including built-in temperature control. 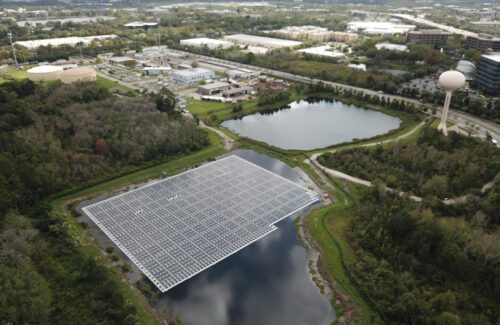 “When your panels are cooler, they operate more efficiently, so you get more production out of them,” said Chris Bartle, director of sales and marketing for the Americas at Ciel & Terre. “Water managers like [floating solar arrays] because when you block light, you’re preventing algae growth, you’re preventing evaporation from that water body. In places like California, Texas and the Southwest, where we’re in a perpetual drought, water’s valuable, so putting a lid on those open reservoirs, you get a double benefit there.”

Ciel & Terre, an international floating solar components manufacturer, compares the layout of these aquatic arrays to commercial rooftop projects. However, the installation process is unlike anything else in the industry.

Securing an island of solar panels

Floating solar projects are typically installed on manmade bodies of water, like water treatment facilities, hydropower dams, quarries and reservoirs, because they can be contaminated and have little on-water activity. The first step in the installation is securing anchors and mooring lines that will attach to the floating solar array.

Mooring is either guided to the shore or sunk to the bottom of the water body. That choice depends on the array’s location and the circumference and depth of the water. If the water is too deep, then mooring can be run to the shoreline. If it’s shallower and the project owner prefers to have the array further offshore, then mooring can attach to submerged anchoring. Or the array can use a combination of both submerged and shoreline anchoring.

Much like ground-mounted and, in certain cases, commercial rooftop solar, floating projects can use penetrating or ballasted anchoring. The choice for anchoring often comes from the permitting authority on a given project. There are cases where a lakebed cannot be penetrated, because of contaminated soil or a liner covering the surface, and weighted ballasts would be used in those instances. Otherwise, penetrating anchors like ground screws or helical piles work well.

“The anchors themselves are the same that would be used for any other kind of ground-anchoring application, similar to a cell tower or an antenna,” Bartle said. Since working on the water is new territory for solar contractors, it requires hiring OSHA-certified boat captains and either divers or drilling rigs to install and inspect anchors.

Different than land-based solar arrays, a floating project’s mooring lines must have some built-in elasticity or slack to anticipate water movement. Anchors and mooring are meant to keep arrays in place, but water is constantly in motion. River-fed bodies of water will have currents, wind causes waves, water levels will rise and fall due to evaporation and precipitation, dammed reservoirs will be drained or filled, and water can freeze and thaw.

“In some cases, with a hydro dam, it might go up and down 100 ft, so we have to have pretty complex anchoring assemblies to accommodate that,” Bartle said.

Mooring line features will vary by manufacturer. Ciel & Terre produces custom mooring to fit project needs and parabolic lines that attach to the shore. SEAFLEX is an international mooring manufacturer that has served the marina industry for 40 years, and its mooring uses an elastic rubber that can stretch up to 30 ft and remains taut when unstretched.

Once anchors are set, buoys attach to the ends of mooring lines and await groups of floating solar panels.

“It’s a combination of the water body owner, the EPC contractor, the anchoring [subcontractor], the owner of the electrical system and us to decide what the best anchors are,” Bartle said.

After the anchors and mooring lines are installed, floating panel rows are assembled on shore. The hollow floats connect in a series and use secondary floats between each panel row that act as walkways for maintenance access.

“You’re assembling the panel to the racking, and the racking to the float and then the floats to each other, all on shore,” Bartle said.

He likens the process to building something out of Legos or an Erector set. Ciel & Terre floating solar platforms are composed of high-density polyethylene and manufactured using blow molding, the same process used to make food and beverage containers. Kayaks, buoys and marina docks are also made of the same plastic.

“It’s not a new material — it’s a new application for the material,” Bartle said. “But it allows the product to exist in cold and hot temperatures, so it can expand and contract without failure.”

Ciel & Terre’s Hydrelio floating solar line includes aiR 1280 floats. One solar panel is installed per float at either 5 or 12° tilts. Previous models had built-in tilts, but aiR uses metal brackets and rails to offer variable panel angles. Ciel & Terre floats can be assembled in one- or two-row configurations, including east-west orientation, depending on wind loads. Sections of a floating solar project are assembled on shore, dropped into the water and pulled by boat to the anchoring. RETTEW

It is necessary to build ramps to guide the floats down to the water, especially if the shoreline is steep. Once a block of floats is assembled, it is launched into the water and hitched to a boat. Then the block is pulled out to the mooring lines and attached, repeating the process until the entire array is assembled.

“There’s a whole other safety and regulatory piece to it that we don’t have as much in ground-mount or rooftop. You can just walk to the work,” said Jason Wert, market leader of renewables and energy production at RETTEW. “Here it’s a little different. We try to do a lot of the work, as much as we can, on shore. You’re trying to minimize the amount of on-water work that you’re doing.”

RETTEW is an engineering firm that has designed and built three floating solar projects on the East Coast, recently completing construction on an almost 9-MW floating array in Millburn, New Jersey. Its first floating solar project in Sayreville was 4.4 MW, and Wert said that RETTEW is already in preliminary planning for systems about 10 times that size.

U.S. floating solar is on the rise, but its pricing is still not as competitive against other racking solutions on the market. Ciel & Terre’s Bartle estimated that a floating solar project costs 10 to 15% more than a ground-mount system of a similar size.

“The reality is that it’s more expensive than ground-mount. If you’re doing large-scale solar, it’s hard to beat a single-axis tracker on a farm field in the Midwest,” Wert said. “We view floating solar as being a very good application for where [ground-mounted is] just not a suitable technology.”

Extraneous services like hiring boat captains and divers will add to project costs, and solar floats occupy more space than other styles of racking during shipping, which increases costs there too.

However, there is still a unique value for floating solar for customers that do not have adequate rooftop or land space. An NREL study from 2018 claims that more than 24,000 water bodies in the United States are suitable for floating solar projects, and installing on 27% of those sites could provide 10% of the country’s electricity.

It might not be the first choice for every project, but there will be applications where floating solar will be the best option.

“What I tell EPCs is to just consider floating solar as another tool in the toolbox to get your customers to renewable energy,” Bartle said. “We’re not trying to take over any market share from any other solar product. It’s just a complementary product line that developers and EPCs are excited about. It’s a new frontier.”