Some of the largest companies on the planet might have been born on the internet, but they still have real in-person requirements to run successfully. The data centers hosting the infrastructure of websites like Facebook, Amazon and Google have high electrical demands, the larger examples reaching 100 MW; not to mention the energy demands of those companies’ headquarters and, in Amazon’s case, retail warehouses. That’s why these internet and e-commerce giants have made major power purchases and commissioned the installation of solar projects globally. Here are just a few of those arrays located in the United States: Community Energy developed the 80-MW Eastern Shore solar farm on the Delmarva Peninsula in Accomack, Virginia, for retail giant Amazon. The system is sited on about 1,000 acres and uses single-axis trackers. The nearby Eastern Shore Community College is using the solar array to teach residents about the technology. Amazon has commissioned 12 solar projects — completed or under development — in Virginia alone. Community Energy 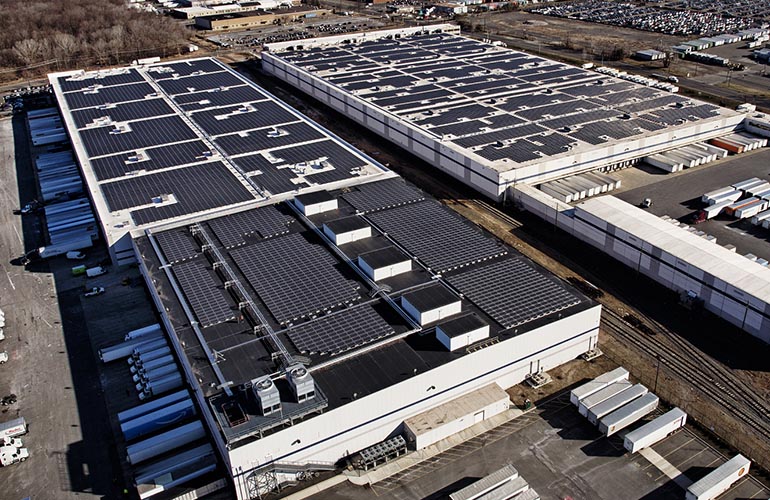 Pictured is a rooftop solar system installed at Amazon’s fulfillment warehouse in Avenel, New Jersey. The company met a goal to install solar at 50 of its distribution centers worldwide. With on-site arrays alone, Amazon has approximately 11,700 modules at its warehouses. P2 Photography Cypress Creek Renewables developed and constructed the 74-MW Rutherford Farm solar project in Rutherford County, North Carolina. Google is the sole off-taker on the project that was initially devised through Duke Energy’s Green Rider program and later acquired by Southern Company. The system was installed and developed by Cypress Creek Renewables. In addition to the company’s off-site systems, Facebook also touts a 3-MW rooftop array at its headquarters in Menlo Park, California. The array is installed across a variety of rooftops at the sprawling headquarters, which is LEED Platinum certified. The social network’s offices are all powered entirely by on- or off-site renewable energy. Facebook The home that once housed Facebook’s first set of servers — back when the social media site had a mere 200,000 users — now has a rooftop covered in solar panels. Judy Fusco rented her California home to Facebook founders Mark Zuckerberg, Dustin Moskovitz and Sean Parker for seven months as the social network’s popularity exploded.