GridShare announced the launch of its independent crowdfunding platform to help renewable energy projects and cleantech companies raise capital. By creating an online platform where investors can independently engage with project owners seeking funding, GridShare is a game-changer for the alternative energy industry.

“Raising money has been a huge impediment to the growth of the capital-intensive renewable energy industry,” said Jack Jacobs, CEO and co-founder of GridShare. “Now, with GridShare’s help, a project developer or cleantech venture can tap into a new funding channel and ultimately spend less time fundraising and more time focusing on its core business.”

Posting a project on GridShare is free and easy. Once the GridShare team approves the project, it will be published online. Investors will then have the opportunity to review the project details, and invest online. With respect to U.S. offerings, GridShare earns a commission from the offeror only if its funding goal is fully achieved. GridShare also offers optional services, such as assistance in preparing listing materials, filing forms, facilitating investor webinars, and managing the security offerings.

“For too long, large financial institutions and accredited investors have controlled the financing for renewable energy. Finally, project developers like Pristine Sun can rely on GridShare to facilitate innovative solar investments available to all investors,” said Troy Helming, president of Pristine Sun, a major developer of solar projects in the U.S., and the sponsor of two listings currently hosted on GridShare.com. “Pristine Sun can now get support from the crowd to complete its solar projects, and the crowd can now own part of our projects and participate in the growing market for clean energy in the United States.”

GridShare also announced that it will be exhibiting at the Intersolar North America Conference. 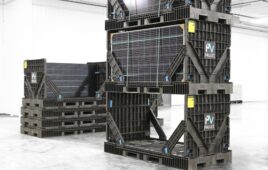